Here’s what you need to know about internalized oppression

In this blog post, we discuss what internalized oppression is. 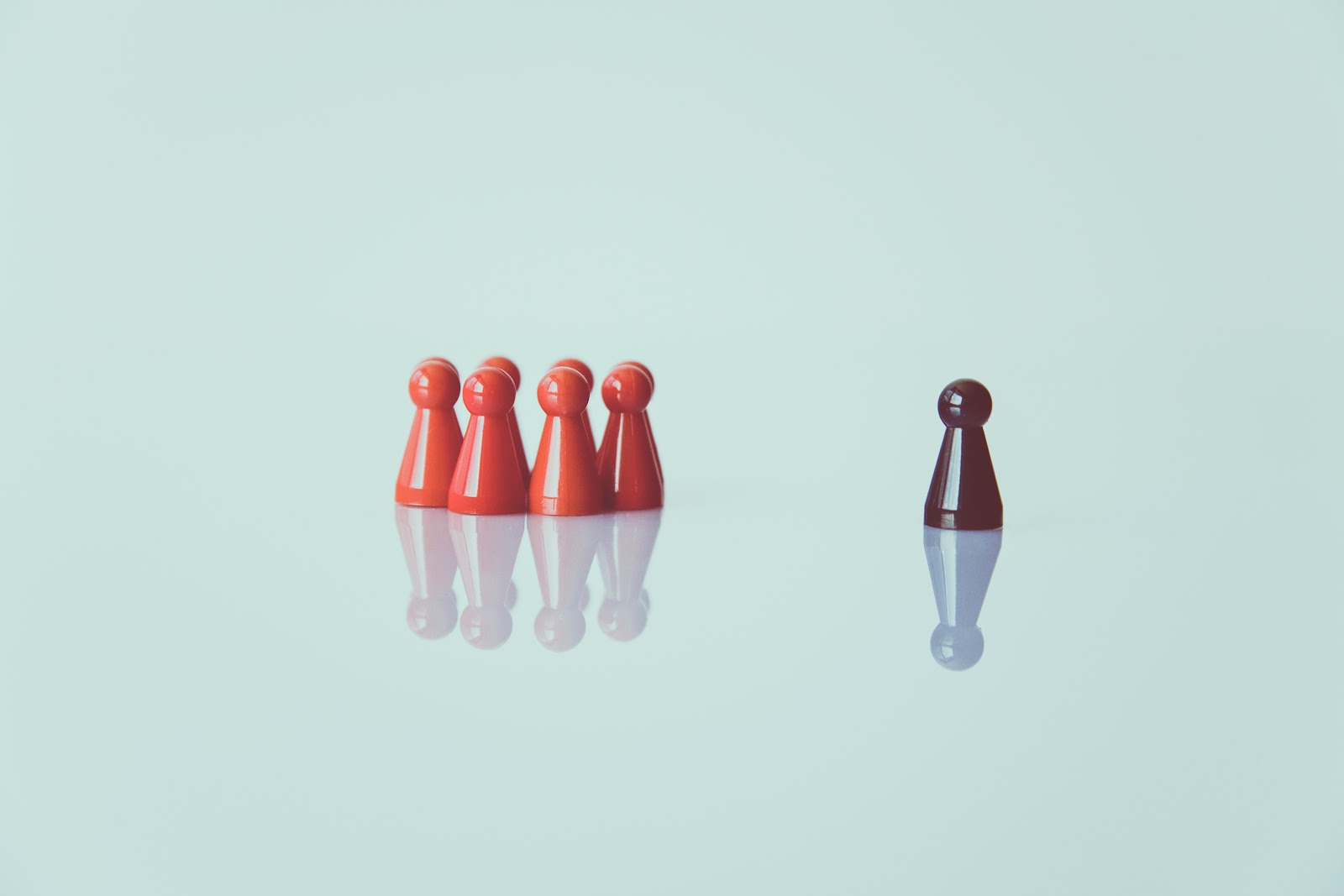 What is internalized oppression?

Internalized oppression refers to the insidious processes by which one’s experiences as a member of a devalued minority group are internalized and become associated with their self-system.

Internalized oppression often takes the form of negative attitudes, beliefs, and feelings about oneself as a minority group member and about one’s minority group.

All forms of oppression (e.g., racism, heterosexism, sexism, classism) exert their influence at both the sociopolitical and personal levels and can take on both external (e.g., prejudice, harassment, discrimination) as well as internalized forms.

Sociologists believe that internalized oppression rather than external oppressive events (e.g., harassment and discrimination) may be the most damaging psychological injury that is due to oppression.

Many persons have multiple sociocultural identities and may internalize oppression on the basis of more than one minority status.

Consistent with these theories, most research on correlates of internalized oppressions has utilized a primary-oppression perspective, in which one form of oppression (e.g., internalized racism) experienced by an individual with multiple identities (e.g., African American LGBQ person) is considered the only or the most important source of oppression that negatively impacts psychosocial health.

In simpler terms, we define internalized oppression as assuming all the stereotypes that someone says about us by adopting a behaviour that unconsciously confirms exactly these stereotypes.

This does nothing but reinforces prejudice.

What is a stereotype?

People are often defined as members of groups, depending on their culture, religious beliefs, background, or external characteristics, such as their skin colour, size, hairstyle, or clothing.

Often, this definition of groups fits with the attribution of specific qualities to people, so that specific images are associated with certain groups.

If these images are exaggerated insofar as they hardly correspond to reality, we call them stereotypes.

Stereotypes are fixed, distorted ideas, superficial thoughts, camouflaged myths or common, generally wrong opinions, that people have about various people, situations, things, phenomena, through which our brain tries to simplify the complex reality.

They are part of our cultural heritage and are passed over time as social norms, customs, traditions (there are studies that show the presence of stereotypes even at a very young age, 6-7 years old).

Therefore, we have been contaminated since childhood with certain ideas, messages, information that shape our stereotypes and based on which we activate our prejudices (for example, a black cat and the number 13 bring bad luck, men are not allowed to cry, don’t turn around because you will be unlucky all day, etc.).

From stereotype to prejudice

If a person or group is judged only on the basis of stereotypes and not as an individual or group of individuals, we are dealing with prejudice.

An opinion was formed about a person or a group without knowing them.

Such opinions and ideas often have nothing to do with reality and are also often unfavourable or hostile.

Prejudice refers rather to a certain preconceived opinion, erroneous reasoning, emotional reaction, position, attitude or global tendency, for or against, favourable or unfavourable, towards one or more persons, based on their belonging to a certain group or to a certain ethnicity, culture, religion, social class or influenced by other personal characteristics.

Both stereotypes and prejudices can be understood as filters of protection developed by man against the influx of information on the basis of which we judge events, situations, people, without personal knowledge or only after a superficial knowledge; they limit our correct and objective understanding of reality and build barriers, often very rigid to rational influences and in communication or interaction with those around us.

Often stereotypes and prejudices cause us to develop and use labels on others, without being aware of their effect and impact on the people involved.

It is no less true that these labels, immediately after their utterance, create in us the illusion of a state of peace, liberation and satisfaction, without anticipating the long-term effects and costs (it is said that the most painful wounds are those caused by words and not the physical ones).

What are stereotypes good for?

Prejudices seem to make the world simpler and less complicated.

If people meet other people who seem strange, this often gives them a sense of unease.

In such situations, prejudices allow people to hide their anxiety – they can pretend to know everything about the other person(s) and do not need to ask any questions.

But, as a consequence, from the very beginning, a meaningful meeting and a real conversation became impossible.

What are the consequences of prejudice?

Prejudice is offensive. First, it is used to treat someone unfairly.

Prejudices deprive people of the opportunity to show who they really are and what they are capable of.

For example, an employer cannot offer a job to Turks because he has heard that “they” always come to work late.

What can we do against prejudice?

Prejudices die hard and are therefore hard to bear. But we must not lose hope: no one is born with prejudices.

They have been learned and can, therefore, can be unlearned. Before judging a person, ask them to explain why they did what they did.

Remember that you would certainly not like to be judged without being heard.

Discrimination means any difference, exclusion, restriction or preference based on the following criteria:

As well as any other criteria aimed at, or as effect restricts, removes the recognition, use or exercise, under conditions of equality, human rights and fundamental freedoms or recognized rights of law, in the political, economic, social and cultural field or in any other field of public life.

According to United Nations statistics, in less developed countries, two – thirds of the total illiterate population are women.

Moreover, violence against women is a universal reality, worldwide, a third of women or girls are being beaten or sexually abused during their lives.

Discrimination based on religious criteria implies exclusion or rejection of a person or group of persons because of their religion and beliefs.

In today’s society, marked by numerous conflicts at a global level which have a religious component, this type of discrimination is more and more accentuated, and its effects are more and more serious.

Thus, after the events of September 11, 2001, Muslims bear the constant suspicion of being terrorists or having connections with terrorist groups.

Just imagine how many abuses there have been during this whole period against Muslims, just because in the collective mind, a terrorist is associated with a Muslim.

Racist theories very often resort to the assumption that some races are genetically inferior of others, which justifies their discrimination.

In the last century, the Nazi ideology justified the killing of 5.7 million (or 78% ) Jews.

Because of the social stigma that LGBT people face, most of them hide their identity or orientation for fear of the consequences. Self-marginalization limits both

the possibility to conduct studies, research on the LGBT population, but also limits knowledge on specific issues.

But is it right to give up what you think and who you truly are, for fear of not being the same with others, or because others pressure you to adopt their beliefs?

Until where we are allowed to exercise our freedom of choice on how we live our own lives?

Is being surrounded by the diversity that frightening that we have to reject it, to deny everything that is different about us?

In simple terms, an oppressed person is a person whose human rights are being violated.

A situation of oppression is characterized by a lack of freedom, lack of justice, and psychological pressure on a person until it finally breaks.

At the social level, the tendency is to put everything in boxes, to have everything well organized, with labels, in order to have discipline.

Anything that goes out of standard must be brought back to “normal” immediately, whether it fits there or not.

This rule of putting a label on anything or on anyone, by putting them in a familiar, risk-free setting, is strongly enforced.

No action in society remains unlabeled, people being constantly guided to judge any statement, thought, action, feeling, thus developing a very strong and at the same time strange stress factor, which we call social oppression.

If we don’t label or discriminate, we’ll automatically consider that something is wrong with us and thus will put pressure on ourselves to become like others, to “fit in”.

The cycle of internalized oppression

It is exactly as I described above.

It all starts with a stereotype, usually one passed down through generations, continues with prejudice, because that makes us feel safe.

The next step is discrimination, which again, makes us more confident, gives us the illusion that we are protecting ourselves from something (which is only in our imagination most of the time).

We continue with oppression – or so-called social power that we believe we have over inferior groups.

The last step is internalized oppression – or assuming all stereotypes about the group you belong to.

Then we start over, perpetually. Few people manage to break this cycle.

In this blog post, we discussed what internalized oppression is.

Unfortunately, not many people get to break the cycle of oppression, but speaking about it, making people aware of these issues, is a step further.

One should be aware of the negative consequences of internalized oppression, even in 2020.

Please free to ask any questions or share any comments you may have!

What is an example of internalized oppression?

An example of internalized oppression is when the members of a marginalized group (marginalized by discrimination) accepts all the stereotypes about them and behaves accordingly.

Self-oppression describes the feeling of being mentally and physically under social pressure.

What is internalized dominance?

Having internalized dominance means beliefs that you are somehow superior (dominant) than other social categories.

What are the effects of oppression?

Among the effects of oppression are many forms of physical, emotional and sexual abuse, low self-esteem, mental health issues.

Why does oppression happen?

Oppression happens because the target group members often believe the messages and internalize the oppression.